The good news is that, according to the press release by the Delaware Office of Highway Safety, there will only be one unconstitutional DUI checkpoint in Wilmington on Sunday. It will be conducted by New Castle County DUI Taskforce. As many of you are aware, I believe that DUI checkpoints are unconstitutional and should be declared illegal. They use a dragnet approach to ensnare hundreds of motorists, the vast majority of whom are doing nothing wrong. After stopping and harassing those motorists, the innocent are let go. Those who are suspected of drunk driving and those who are wanted on existing arrest warrants are hauled in and arrested.  There will be roving DUI patrols as well.  There will be 38 saturation patrols. 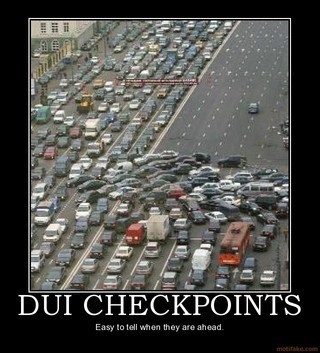 Please note that as I stated above, I found this information in a press release issued by the Delaware Office of Highway Safety about “Safety Down Day” on Dover Air Force Base. Hidden at the bottom of the press release is information about this Sunday’s DUI checkpoint and roving saturation patrols. Why is the Office of Highway Safety hiding information about checkpoints? The purpose of advertising the checkpoints is so that the general public will be aware that enforcement activity exists, which should reduce drinking and driving generally. Why would this information be hidden at the bottom of a press release about an event on a different day on Dover Air Force Base? Furthermore, the press release actually states that the checkpoints will be held on Friday rather than Sunday. This is misleading. I wonder if this is merely an innocent typo, or if there is something nefarious going on.