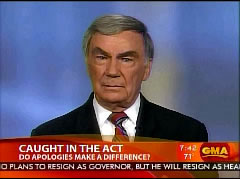 According to news reports, Donaldson was operating his vehicle on Savannah Road. He ran the vehicle off the roadway, and was pulled over. Once pulled over he failed sobriety checks and was arrested for Driving Under the Influence.

This news report points up the fact that ANYONE, even one of the most trusted news men in America, can be arrested and charged with DUI in Delaware. If you have been charged with DUI, it doesn’t mean you are a criminal or a bad person. Don’t be ashamed – just call for help and get on the right track.